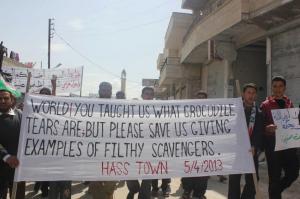 Editorial of the newspaper of the Revolutionary Left Current in Syria:

Front Line, the newspaper of the Revolutionary Left Current in Syria

A TRANSITIONAL GOVERNMENT … FOR WHOM?

The extension of the “liberated” areas from the shackles of the dictatorial bourgeois regime, and the extent of mass destruction which they undergo from the continuous shelling by regime forces, and the devastation of infrastructures and all aspects of social life, is accompanied by an increase in the number of local and civilian councils attempting to manage the affairs of the daily life of citizens. In parallel, coordination committees continue to develop in the form of self-organizing structures of the popular movement, while the battalions of the Popular Resistance democratic army — composed of masses who have borne arms and dissident soldiers — play their role of confronting the killing machine of the dictatorial regime; we exclude here the jihadists and Islamists supported by oil monarchies and who are minority factions and who limit their ambition to something else: an Islamic state, i.e., a reactionary project for which the revolutionary masses did not  make their sacrifices; they did so rather for freedom, democracy, equality and social justice.

The transitional government we support must embody the revolutionary social components of the popular revolution, namely the workers, poor peasants and soldiers. It should not be a game or a contract awarded following demands from Qatar, Saudi Arabia and Turkey in one of the hotels in Istanbul, and behind which are aligned the Muslim Brothers who have become a burden and an obstacle to the victory of the revolution because of their opportunism, their organic subordination to backward states, notably Qatar, and their ignoble use of financial funding and medias of their states to buy allies among the ranks of the people – which was denounced in many demonstrations. The Brotherhood-liberal government of Hito was established under the demand of Qatar, and these maneuvers of the Muslim Brotherhood have been rejected by the Free Army and the popular movement. It thus becomes a component of the counter-revolution, of which it is our duty to bring down, like the dictatorial regime.

We call for a transitional government that would be the revolutionary expression of the power of the people in revolt.

THE REVOLUTION … A THIRD YEAR …

This majestic popular revolution enters its third year, in a context of major sacrifices, destruction, suffering and exile. And this is the revolution that extends its “liberated” territories, tightens its grip on the regime of the decadent junta and increasingly approaches victory.

And despite the big uproar about the so-called regional and international support for the struggle of the Syrian people, we must admit the naked truth: our revolution is an orphan one, and many of those who claim to be its friends betray it.

The allocation of the seat of Syria in the Arab League to the National Coalition has no more than a little symbolic value, since this league is a decaying institution of corrupt regimes facing popular uprisings. As for the financial support and weapons, it is almost all support by the Sheikhs of Qatar and Gulf group to the jihadists and Muslim brothers who, with the junta regime, constitute components of the counter-revolution, one wanting to steal it or turn into a religious war, the other working with all its power to put an end to it. None of these forces want it to triumph as a liberation revolution of the people from the yoke of repression, authoritarianism, exploitation – for an emancipated society based on justice and equality.

Our revolution is indeed a majestic one. It is not only facing a murderous regime of the worst kind, which does not hesitate to treat its people as an enemy and try to crush them with all kinds of weapons and missiles. But it is also a magnificent revolution because it was able to prevent all parties of the above-cited counterrevolution from achieving their goals while preserving its original claims of emancipation, equality and justice.

The challenges facing the popular revolution are many, including the attitude of many jihadis and Islamist groups who try to impose their visions and social conceptions in the liberated areas and have so far failed: the popular masses have challenged them in Aleppo, Mayadin, Al-Qusayr and other cities. It also faces delinquency and crime of armed groups that act as gangs and not as insurgents. Our revolution is also facing a siege, destruction, maneuvers and hypocrisy of the so-called “friends” of the Syrian people, who despite their promises have not provided arms to the democratic forces in the popular resistance, while weapons and money flow to the jihadists and Islamists.

Despite these challenges, the Syrian people know their path and the revolution advances in its original social and national context, to topple the regime of the military junta and construct a free Syria, democratic, pluralistic and with social justice, for the power of the workers, peasants and the toiling masses.

All the power and all the wealth to the people!

3 thoughts on “Editorial of the newspaper of the Revolutionary Left Current in Syria: A transitional government… for whom?”