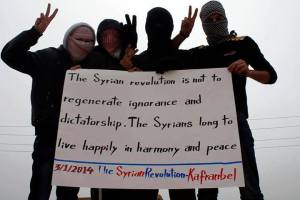 You rarely see these words as written on this banner in the press when it comes to describe what is going in Syria, it is rather:

– « Syria is different, its not like the other popular revolutions »,

These are the sentences we have been hearing from the mainstream medias in the world and in the region to describe the Syrian revolutionary process, while some sections of the left ( stalinists in their majority but not only) with other political parties such as Hezbollah and its supporters have presented the revolutionary process in Syria, as a “conspiracy” against a so called “resistant” regime, regardless of its numerous crimes against the Syrian, Lebanese and Palestinian people and resistance and regardless of its great collaborations with imperialist powers, while of course not firing a single bullet against Israel since 1974 or to liberate the occupied Golan…

All these ways to describe the events in Syria are far from the reality of the streets of the Syrian revolutionary masses. They ignore the demonstrations still taking place throughout Syria on a weekly basis, and nearly daily basis for some regions,  against the Assad regime and groups trying to impose a new dictatorship like the Islamic State of Iraq and Sham (ISIS or Da3ech). They ignore the fantastic banners of Kafranbel every Friday and the preparations that go with it. They ignore the men and women self-organizing and administering whole neighborhoods, which were liberated from the regime, to welcome refugees, to provide education for children, to provide foods for families… They ignore the makeshift hospitals and other medical centers run by revolutionaries and doctors to provide health assistance to people in much need or injured badly after Assad planes bombed some neighborhoods… They ignore the people, journalists, human rights activist and media centers writing, filming and taking pictures of the demonstrations and life in the liberated areas or still under the regime’s control to show us the reality of the ground, while denouncing the attacks on freedom from the regime and groups like Da3ech.  They ignore the people, whether inside or outside the country, organizing to bring humanitarian assistance in the liberated regions, etc…

They ignore the daily popular resistance of the Syrian people.

We have a popular revolution in Syria and this has been the case for nearly 3 years. Yes, the difficulties and threats to the Syrian Revolution have expanded and multiplied, and this from outside and inside. From the outside the Great powers, whether the so called Friends of Syria in the West and in the Middle East or the allied of the Assad regime (Russia, Iran and China), have continuously tried to impose on the Syrian revolutionary masses a political agreement that would maintain the Assad regime as it is.

From inside of the revolution, Islamic State of Iraq and Sham (ISIS or Da3ech) and Islamists extremists attacked the revolutionaries and want to turn this revolution into a sectarian war, with the support of their sponsors the reactionary monarchy of the Gulf, while opposing the objectives of this revolution: democracy, social justice and a Syria for all with no discriminations whatsoever.

The opposition to Da3ech especially has not ceased to develop throughout Syria, as shown on numerous occasions on this blog. (see videos and pictures on this blog for more) 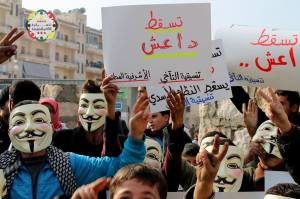 (Demonstration in the neighborhood of Achrafieh, Aleppo, against Da3ech)

These elements comes in addition to the continuous war waged by the criminal and authoritarian Assad regime, with the help of its allies Iran and Russia and sectarian groups from the region with at their head Hezbollah, against the Syrian revolutionary masses. The Assad regime has also used the evil tool of sectarianism to transform the popular revolution in a sectarian war, but was unsuccessful until now because of the resistance of the Syrian revolutionary masses. 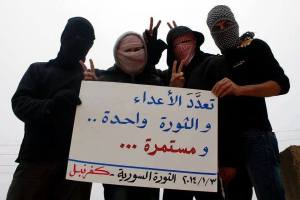 And despite all the difficulties, yes the revolution continues and whatever groups opposing the objectives of the revolution will be overthrown by the Syrian revolutionary masses.

On January 3 2013, we have seen many demonstrations chanting against the regime and Da3ech:

and another demonstration in Aleppo

or also, Da3ech and the regime are the same monsters as drawn Kafranbel revolutionary: 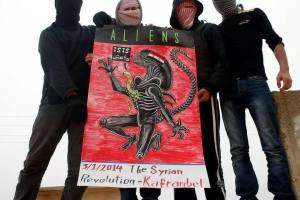 They’re talking about a revolution,”

Oh yes, a revolution that gathers millions of Syrians, Arabs, Kurds and Assyrians, etc… Muslims and Christians, Sunni and Alawites, Women and Men, Children and Elders…

They’re talkin’ about a revolution

Yes it sounded like a whisper in the beginning but now it is shaking the Assad regime, the dictatorship of the world and the great powers of the world

“While they’re standing in the welfare lines

Crying at the doorsteps of those armies of salvation

Wasting time in the unemployment lines

Sitting around waiting for a promotion”

And take what’s theirs”

Oh yes the popular classes have risen up and they want to live in dignity and freedom and not survive without anything.

Oh yes the popular classes have risen up because they want the wealth of Syria to be for all and not Assad’s mafia clique.

Oh yes the popular classes have risen up and they will not stop until they achieve the objectives of the revolution: democracy, social justice and a Syria for all with no discriminations.

Oh I said you better

On yes Bachar Al Assad and your regime you better run, run, run, because Free Syria has no place for criminals and dictators,

Oh yes Bachar you better run, run, run, because you can hear the songs of the free men and women of Syria chanting “ Bachar we are coming for you”, and this is not anymore a whisper, it is more and more loud and closer…

On yes Da3ch you better run, run, run because there is no place for you in our revolution and in free Syria, you enemy of democracy, of diversity, of social justice,

Oh yes Da3ch you better run, run, run, because we don’t want your blackness to darken our colorful revolution

“Finally the tables are starting to turn

Dictatorships and authoritarian groups be careful

Things are starting to change;

People are struggling for freedom and dignity

Yes we are talking about a revolution, the Syrian revolution…

Glory to the martyrs of the revolution

Freedom to all political prisoners

Viva the Syrian revolution for freedom and dignity 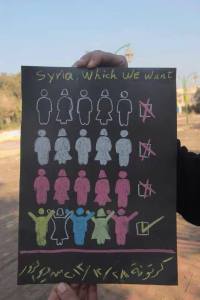