Amid the sham democratic elections organized by the Assad regime to confirm the continuation of the rule of the dictator Bachar Al Assad, the revolutionary people of Syria organized various demonstrations against what they called the elections of blood and this despite the continual war of the regime against them.

Translation: “elections: your candidate for the International criminal tribunal”

Indicated below the number of martyrs and injured. 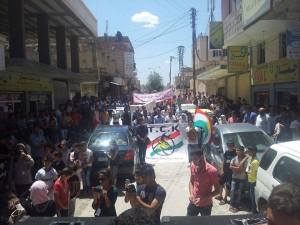 A demonstration condemning the election as an Assad masquerade was organized by the youth movement of the Kurds TCK and Kurdish youth movement of Qamichli.
This latter issued a statement saying that ” they condemn these elections of blood and denounced them as a masquerade. They also condemned the murderous regime for the killing of more than two hundred thousand people and for the displacement of millions, They called for the boycott in the city of Qamichli of the election of blood and for Assad the murderer.

In Aleppo, activists painted rubbish containers with slogans such as  “Cast your vote here,”  “We throw you away, Bashar,” and “Bashar, this is where you belong.”transforming them into mock ballot boxes.

A similar action was made by youth of Yarmouk camp in Damascus.

In the neighborhood of Salah el-Din, Aleppo, protesters demonstrated against the elections despite the threat of constant bombings of the regime planes and helicopters. Since January 2014, more than 2000 people died under the barrel bombs of the regime in Aleppo. 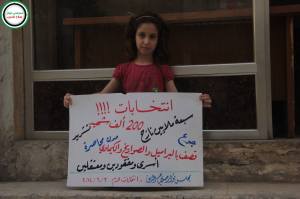 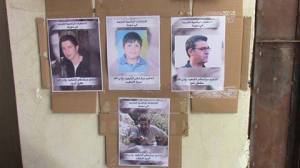 In various neighborhoods under the domination of the regime in Aleppo, a group of activists were able to distribute ( of course without being seen) flyers condemning the elections. 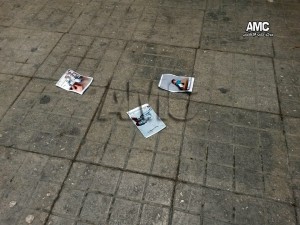 In the city of Kfrdyian, Idlib, a demonstration was organized to oppose the elections of blood. They singed various slogans, including “they will not kneel except in front God” and support to the Free Syrian Army. 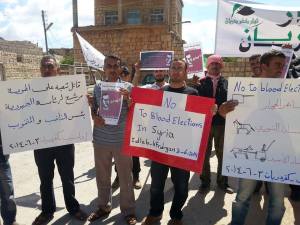 In the besieged region of Ghouta, protesters came out to protest against the elections of blood as well 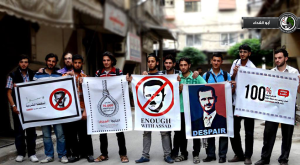 In the city of Kafranbel, the revolutionaries were once more present to show their opposition to the elections of blood

Translation: Participate in the killing

This picture below was taken in the city of Deraa, children saying yes to the revolution and no to Assad’s election

This is without forgetting that before the elections, activists distributed flyers and brochures condemning the elections of blood and the criminal Assad dictatorship in some regime controlled areas such as in Damascus and Hama.

Despite the destructions, killings and everything else, the Syrian people have not kneeled… The Syrian revolution continues…