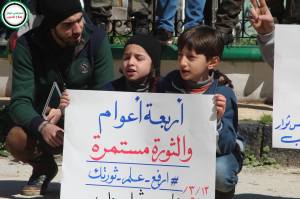 “Four years and the revolution continues”

For the celebration of the fourth year of the revolution in Syria, demonstrations and campaigns were organized by some revolutionary popular councils in regions free of the Assad regime forces and of its allies on one side and Islamic reactionary and jihadist forces on the other side.

In the free neighbourhoods of Bustan Qasr, Salah al-Din and Masaken Hananou neighbourhoods, in Aleppo, in addition to massive demonstrations in the streets, the Council of Revolutionaries of Aleppo organised a carnival that included theatre plays and concerts. [1]

The activists also launched various campaigns at this same period, notably “raise the flag of your revolution”, in opposition to the one of the Assad regime and the black flags of Jabhat Al Nusra and Daech. The flag of the revolution was actually raised by all the demonstrators and throughout the street of the neighborhood, in addition to posters and graffitis of the flag and martyrs of the revolutions. The campaign “raise the flag of our revolution” was actually followed throughout the country in the regions where it was possible, for example Eastern Ghouta and Rif Hama,[2] and towns and villages in which weekly demonstrations still occur, such as Kafranbel.

The different activists of the Council confirmed their will to overthrow the Assad regime and to hold accountable those responsible for the killing and displacement of citizens of the city. Protesters also raised slogans and placards such as “four years and the revolution continues” or “revolution until victory”.

Despite the regime’s bombing, the carnival of the revolutionaries lasted few days.

In the city of Douma, several hundred civilians organised a protest against the Syrian regime in commemoration of the fourth anniversary of the country’s uprising, despite the bombings of the regime’s planes. In addition to this, the organization “The Day After” (TDA)’s Communicators in the city created a memorial for martyrs from the area. The team wrote the names of 200 martyrs that were selected to represent all strands of Syrian society – activists, civil defence, teachers, photographers, aid workers, doctors and many others. [3] The same organisation was also behind the “‪Ishtiki” campaign in the region of the Ghouta. The objective of this campaign was to encourage the inhabitants to express any concerns they may have about the behaviour of armed groups in their areas, and initiate action or dialogue to improve interactions between civilians and armed group members.[4] Finally, in West Ghouta TDA’s organisation worked on a campaign to encourage children to go back to school. Low school attendance, in particular by internally displaced children, is a large problem in many parts of ‪the country.

In the city of Saqba, in Rif Damacus, demonstrators held a protest on the destructions of the buildings and houses of the town for the anniversary of the revolution.

Before the celebrations of the fourth year of the revolution, various activities and demonstrations occurred against the Assad regime and Islamic reactionary and jihadist forces.

On March 23 2015, The Fraternity Centre for Democracy and Civil Society in Syria, popular organisation composed of Syrian Kurdish and Arab citizens, launched a solidarity campaign with Mazen Darwish and his colleagues of the of the Damascus-based Syrian Centre for Media and Freedom of Expression, still imprisoned by the Assad regime, in the cities of Al-Hasakah and Qamishli and Terbspie and Rass Al Ain.

In Mid March, the free neighbourhoods of Aleppo organised protests in solidarity with the city of Douma, which was suffering from heavy bombings of the Assad regime. Placards of solidarity could be read such as “my body is in Aleppo and my soul is in Douma”.[5]

In the beginning of March 2015, and after two months of opposition and massive demonstrations in the city of Beit Sahem in Rif Damascus were able to expel, with the help of the FSA, Jabhat Al Nusra from these cities, despite its use of violent repression. The revolutionaries condemned the violent and repressive actions of Jabhat Al Nusra in the towns of Yalda, Beit Sahem and Babbila.

Several demonstrations have also been organized in a village of Rif Idlib since end of February against the authoritarian practices of Jabhat Al Nusra.[6]

In the city of Saqba, Rif Damascus, a demonstration of the mothers and relatives of the detainees, who were arrested by the Army of Islam led by Zahran Alloush, was organised to demand their liberation.[7]

On February 6, 2015, a mass demonstration in the neighbourhood of Sheikh Maqsoud, in Aleppo occurred with the original slogans of the revolution raised such as “the Syrian people are one” and “Freedom and Dignity”. In an interview made during the demonstration, a protester said that this protest shows the unity of the Syrian people, the living together, Arabs and Kurds.[8]

In mid January 2015, groups of civilian activists in the “liberated” territories of Aleppo published a statement, signed on behalf of “revolutionaries of the liberated city of Aleppo”, in which they announced a strike to protest the kidnapping of some medical doctors by members of Jabhat Al Nusra. The statement addressed the bodies of medical and civic councils operating in Aleppo, inviting them to “assume their humanitarian responsibilities, and to maintain the security of the medical staff.”

According to the statement, the medical doctors in Aleppo oppose the kidnapping, by Jabhat Al Nusra, and called for a “general and global strike in all the hospitals and medical centers in the liberated territories of Aleppo”.[9]

On the first year of 2015, a demonstration in the neighbourhood of al Wa’er, in the city of Homs, which was reoccupied in May 2014, was organised against the Assad regime and security forces.

Every democrats and progressists must lend its support to these popular organisations and activists that sustain the initial objectives of the revolution (democracy, social justice and equality) against the actors of the counter revolutions represented by the Assad regime and Islamic fundamentalist forces.

3 thoughts on “Popular resistance in Syria, despite everything, for the celebrations of the fourth year of the revolution”